What a crazy week we had!

We arrived a day after riots, fires, and looting had started. 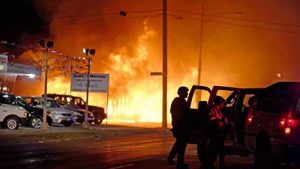 Places that I had walked past my whole life were now piles of smoldering rubble. An old friend’s business, was burned to the ground. Our first night there, three people were shot, and two of them died.

It was far from the “best place to raise your kids” town that I grew up in. It had become a frightening place where people from outside the community had come to create chaos and destruction.

I was heartbroken and anxious. But, most of all, I was angry. Furious. I wanted to hurt back. A friend said that he knew where all of these out-of-town rioters had parked their cars, and suggested that we pay them back by vandalizing their vehicles.

I have to admit, I was tempted. I wasn’t going to let the fact that I’m middle-aged, and not particularly fast, stop me.

But then my wife (and voice of reason) chimed in, “Is that what Jesus would do?”

I hate it when she asks that.

Needless to say, I didn’t slash any tires or graffiti and windshields. I just seethed and wrung my hands.

Then, some local church leaders announced that they would be gathering in the park where the protests began each night, and that they were going to pray and worship the Lord for two hours.

Unfortunately, we had to head out of town a couple of hours before their meeting began, but I heard the reports, and they were amazing.

Nothing short of supernatural.

Around a thousand believers showed up to cry out to God for their city. People were set free, they gave their lives to Jesus, and were baptized. There was reconciliation. It was miraculous. 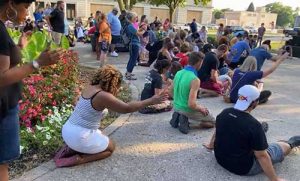 You know what else? The protests that night (and every night since) were peaceful. No more burning. No more looting. Just marching and declaring their petition.

I guess love really does win. Fighting fire with fire really is futile. When Jesus wanted to flex his muscles, he washed feet and sacrificed his life.

If only we could learn to ignore the impulse to take an eye for an eye, and turn that energy toward prayer and loving service. We might just see more miracles!

Wherever you stand on the issues we face today, I hope it’s motivated by Christ-like love.

Well, hopefully, the rest of my vacation will be more relaxing!